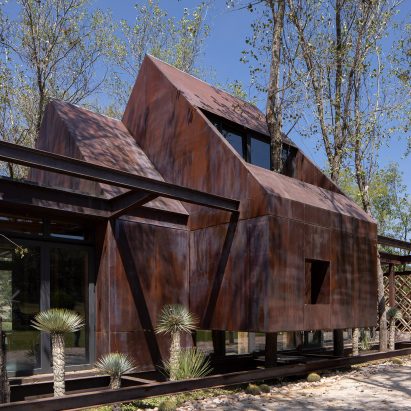 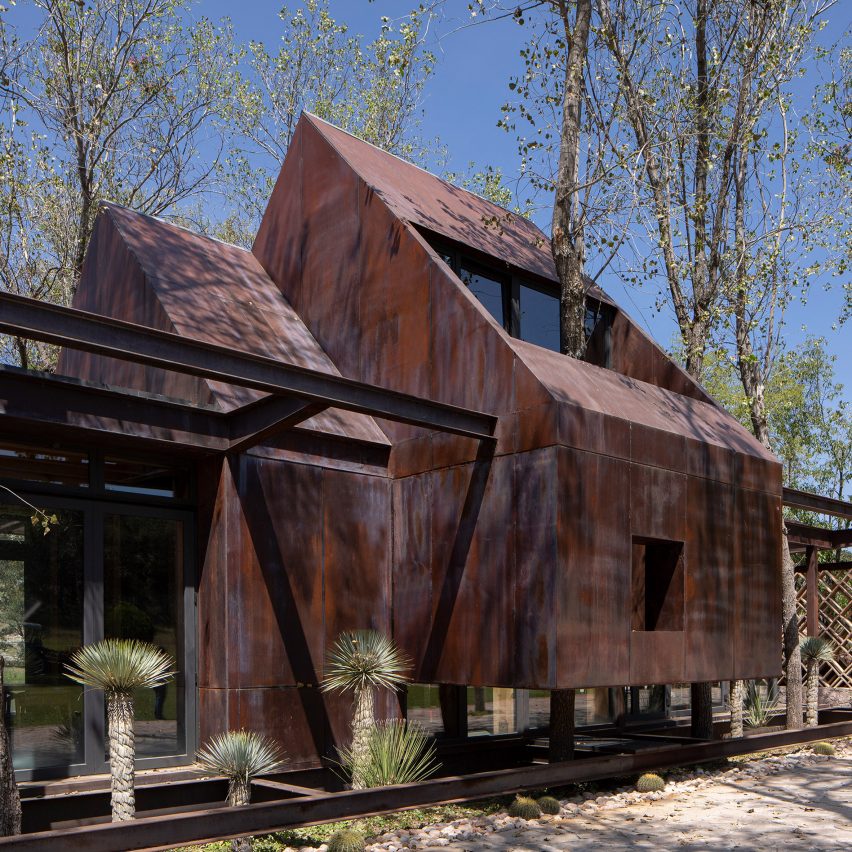 Fabián M Escalante H Arquitectos created the retreat for a client who owned a large plot of land with a dam and wanted a building that wouldn’t disturb the environment around it.

“The most important requirement was to keep, completely, all trees in the plot,” studio founder Fabián Marcelo Escalante Hernández told Dezeen.

“Therefore, the first approach to the project was to know perfectly the site and the exact position of the vegetation.”

The resulting building in Guanajuato, Mexico was thus built around the trees and designed as a place for rest and social activities.

It has two entrances, with a footbridge leading to the house from the east and a large terrace providing space for socialising to the west.

The terrace also functions as an entrance hall and has a grill and food preparation area, while the main gabled volume in the house, which is built above the water, houses the family room, dining room and a double-height bar.

“We wanted to create a subtle intervention in the landscape, but at the same time a space for multiple activities,” Hernández said.

“The entire public programme allows us to experiment with the space,” the architect added. “The bar space was hierarchizing through a double-height, that’s the gabled steel volume.”

The studio designed the inclined planes of the gabled roofs to have views of the treetops, and their form also references the local architecture in the rural part of Mexico where the Rancho Sierra Allende is located.

“This shape allowed us to play with two transversely intersected triangles, the largest symbolically embracing the void outside, leaving a tree in an indoor/outdoor game and the second triangle embraces the interior space,” Hernández explained.

A tree stretches through the larger triangle, which is partly open to the outside.

Fabián M Escalante H Arquitectos created both indoor- and outdoors activity spaces. “The terrace is kind of floating above ground,” Hernández said. “This avoids inundations in the raining season and allows the inhabitants to fish in the dam from the terrace.”

The lower part of the terrace rests on concrete piles, while the upper is built on steel columns.

Rancho Sierra Allende was constructed from a combination of steel elements and wooden beams, and the studio worked with materials from the region, including wood, clay and basalt, for the project.

Its striking rust-coloured steel exterior was a request from the client, who wanted a low-maintenance material and originally asked for Corten steel for the facade.

“Budget was an impediment to achieve the use of this material,” Hernández said. “Therefore, we had to choose to use cold-rolled black steel sheets. The cold rolling increases the strength and hardness of steel and decreases its ductility.”

As the building process and time aged the house, the exterior, which was finished with a sealer, achieved the reddish hue it has today.

Fabián M Escalante H Arquitectos also designed the house to take advantage of natural resources. It reuses rainwater for toilets, sinks and showers, while wastewater is treated through a biodigester and used to irrigate garden areas.

The rainwater is harvested on the roof through perimeter channels, which lead to tubes hidden in the columns and further down to underground pits. Here, it is filtered and stored before being pumped and reused.

Other recent Mexican projects that blend the outside and inside include architecture studio Palma’s design for a holiday house with a circular opening and Casa RA, where each bedroom opens onto a patio.

Fabián M Escalante H Arquitectos was founded by Fabián Marcelo Escalante Hernández in 2009 as E | Arquitectos and has been known under its current name since 2018. The studio is based in Guanajuato, Mexico.

Photography is by Jorge Succar.