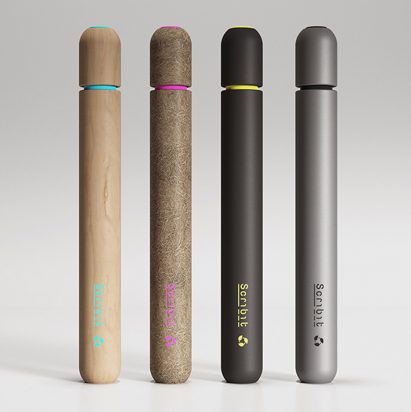 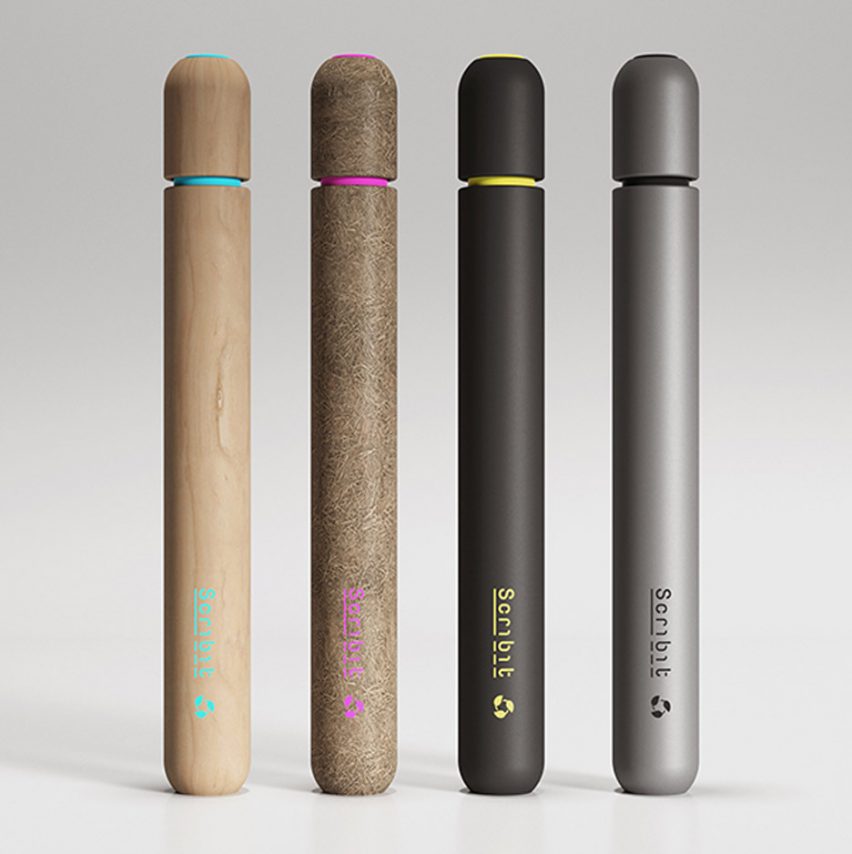 Italian studio Carlo Ratti Associati (CRA) has designed a concept for a compostable marker pen comprising natural fibres and a water-based, edible ink that would break down within six months.

The Scribit Pen comprises a barrel made from a choice of either wood, bioplastic or anodised aluminium, which is designed for repeated use.

This holds a nib and cartridge made from natural fibres including sawdust, hemp fibres, polyhydroxybutyrate (PHB) – a polymer that is used to produce biodegradable plastic – and lignin.

The replaceable cartridge would be filled with a non-toxic, water-based ink made from edible ingredients and composted after it is used.

The bioplastic pen outer will be fully compostable, made from the same materials as the cartridge, while the wood and aluminium barrels aren’t compostable but are designed to last a long time.

“Upon learning that over 35 billion markers are sent to the landfills every year, we began to work on a solution in line with the concept of circular economy,” said the CRA design team.

“As we arrived at the innovative concept to create a cartridge that can be separated from the barrel, we tested a large amount of organic fibres in order to produce the biodegradable cartridge with the optimal performance.”

Designed for CRA’s drawing robot Scribit, the pen is currently a concept and is in its development stage. The bioplastic design has been billed by the studio as a “world first”.

As the design team told Dezeen, it is working towards a final product that would be 100 per cent compostable, with at least 90 per cent of the product decomposing within six months in a general composting environment.

“We are proud of Scribit’s success, and how it has empowered thousands of people around the world to change the way they draw,” said Italian architect and CRA founder Carlo Ratti.

“However we were troubled by the amount of plastic produced by the markers that the robot uses,” he continued. “By developing the new Scribit pen, we can turn one of humankind’s primordial acts – drawing – into a fully sustainable one.”

This isn’t the first time CRA has geared its efforts towards designing products for a circular economy. For last year’s Milan design week the studio grew a series of arched architectural structures from mushroom mycelium, which were later returned to the soil.

It also developed an experimental orange juice bar that turns the waste fruit peel into 3D-printed bioplastic cups to drink the contents from.