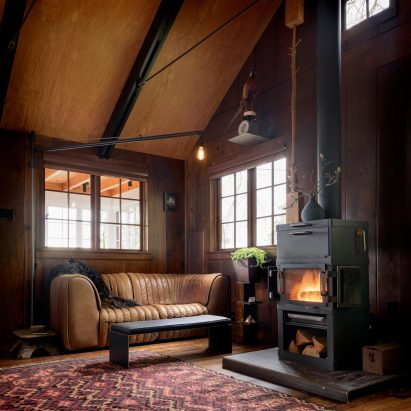 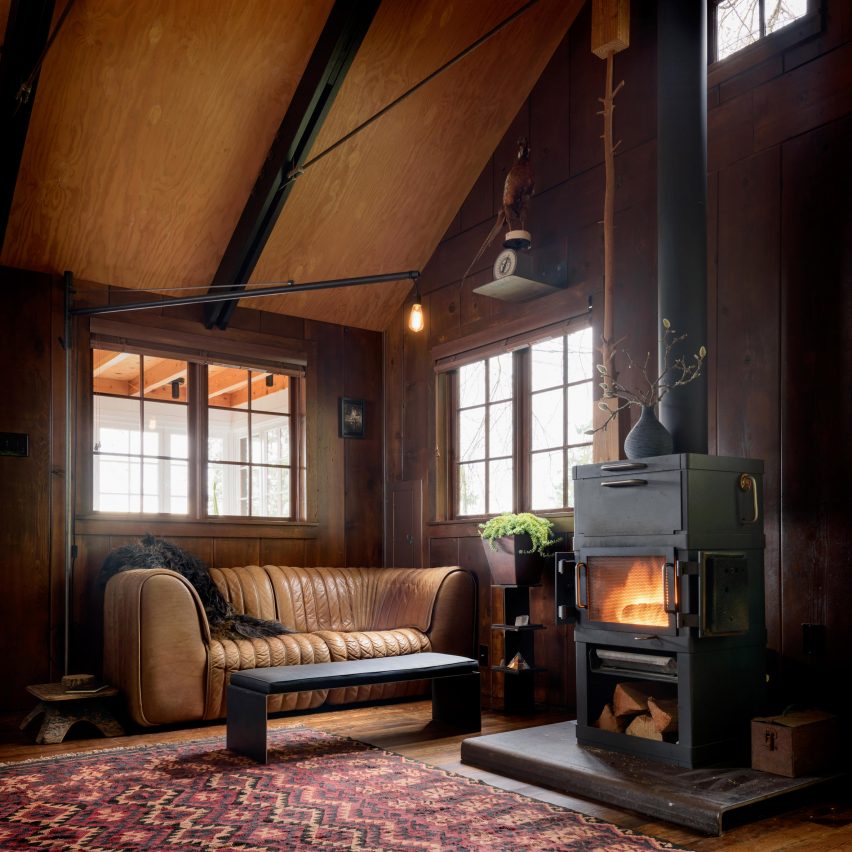 Olson Kundig Architects principal Alan Maskin has renovated and extended a beach cabin from 1938 in Washington State, turning it into his wood-lined retreat.

Agate Pass Cabin overlooks the Agate Passage, a tidal waterway on the Olympic Peninsula. Maskin added a first-floor extension and proper foundations to the old cabin.

Original wide planks of Douglas fir – a species that was bountiful in the region 100 years ago – still line the walls and ceilings.

Where some panels were taken down to make room for alterations, the wood was refashioned into cabinets or storage or used to line new ceilings.

Contrasting wood such as Gulam plywood was chosen for additions to the cabin, to clearly mark what is original 1930s and what is new.

Maskin bought the cabin as a dream renovation project, although it took him years to find the time to work on it after he was made an owner of Olson Kundig Architects.

“My work life and love life were separated by Elliott Bay and a three-hour commute,” said Maskin.

“I was looking for a small, extremely inexpensive fixer-upper. In my dreams, I wanted it to be a small cabin with a view of the water – hopefully with some character – and located somewhere in the middle of my two primary destinations.”

When he heard the cabin had come up for sale he went to view it and realised that he could see Agate Pass if he climbed up on the roof.

“I hired a residential building inspector to check it out and make sure that buying such a rundown house wasn’t insane,” added Maskin.

“While he was underneath looking at the foundations of the house, I noticed 12 bald eagles flying directly over the house. Let’s just say that after that, the inspector’s report didn’t seem as necessary.”

After years sleeping on a mattress in the cabin’s unheated attic while he was busy with Olson Kundig Architects, Maskin finally found the time to redesign the cabin.

New foundations were added, with seismic upgrades as the Pacific Northwest sits on a fault line called the Cascadia subduction zone.

The low ceiling between the living room and the attic was removed, opening the space up to create a five-metre-high vaulted roof beneath the gables. A wood-burning sits on a raised metal hearth.

A screened-in porch was turned into a dining room and office space with views over the gardens.

Upstairs, the new first storey houses a wood-lined bedroom with views over the trees and the water.

The gable end is made of and flanked by windows. A cardboard 3D portrait of the American sculptor Ed Kienholz by the local artist Scott Fife hangs over the bed, which Maskin designed himself.

Maskin also designed the bed and armoire. Above the office space is a first-floor outdoor terrace.

Seattle-based Olson Kundig Architects was founded in 1967 by Jim Olson. More cabins from the practice include a writer’s cabin with drawbridge-style shutters and a narrow yet tall cabin for a family.

Photography is by Aaron Lietz.