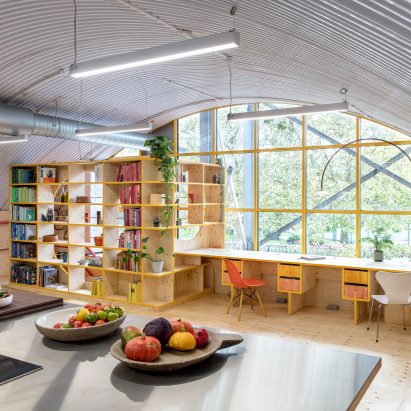 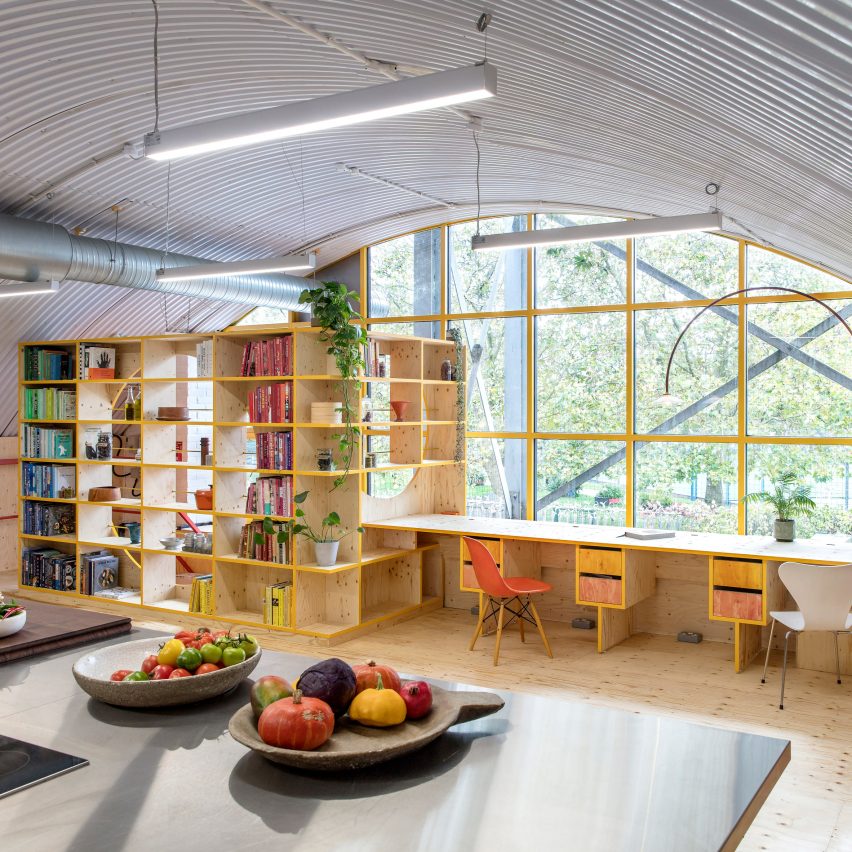 Israeli-English chef Ottolenghi is revered for his take on Middle-Eastern cooking and has come to own six different eateries across London.

His test kitchen – where he develops and trials out new recipes with staff – is located in the north of the capital, occupying a disused railway arch.

The industrial setting was proving less than inspiring for Ottolenghi, so Studiomama was brought on board to revamp the kitchen.

Although no significant changes could be made to the structure of the railway arch itself, the studio instead used bright colours to give the culinary space a fresh feel.

“The Studiomama team managed to transform our test kitchen from a nondescript industrial unit under a grubby railway arch line into a sunny, happy space, where the functionality is perfectly adjusted to our needs: recipes testing, food photography and office work,” explained Ottolenghi.

“Simply being in the room is now a joy.”

This same shade of yellow has been applied as a trim to the plywood bookcase, desk and shelves that have been fitted in the test kitchen.

Some drawers and the inner side of the bookcase – which is punctuated with a round opening – have been stained pinky-red in a nod to the hue of Ottolenghi’s signature raspberry meringue roulade.

A red iteration of Belgian brand Muller Van Severen‘s Hanging Lamp has also been installed beside the window and a berry-coloured coating has applied to the stairs, which leads down to a storeroom.

The pops of yellow and red are also meant to be evocative of the roster of colourful spices that Ottolenghi incorporates throughout his food.

Plywood lines a majority of surfaces in the office area of the test kitchen, but the cooking area has been finished with grey safety flooring and steel prep counters, made large enough so that staff can work at a distance if necessary.

Based between London and Stockholm, Studiomama was set up in the year 2000 by creative couple Nina Tolstrup and Jack Mama. Previous projects include the revamp of a 300-year-old loft in Stockholm and the transformation of a tiny 13-square-metre cab office into a home.

The studio has also created a number of furnishings, such as a trestle table and a wardrobe that unfolds to become a room divider.