How to build a zero-carbon skyscraper 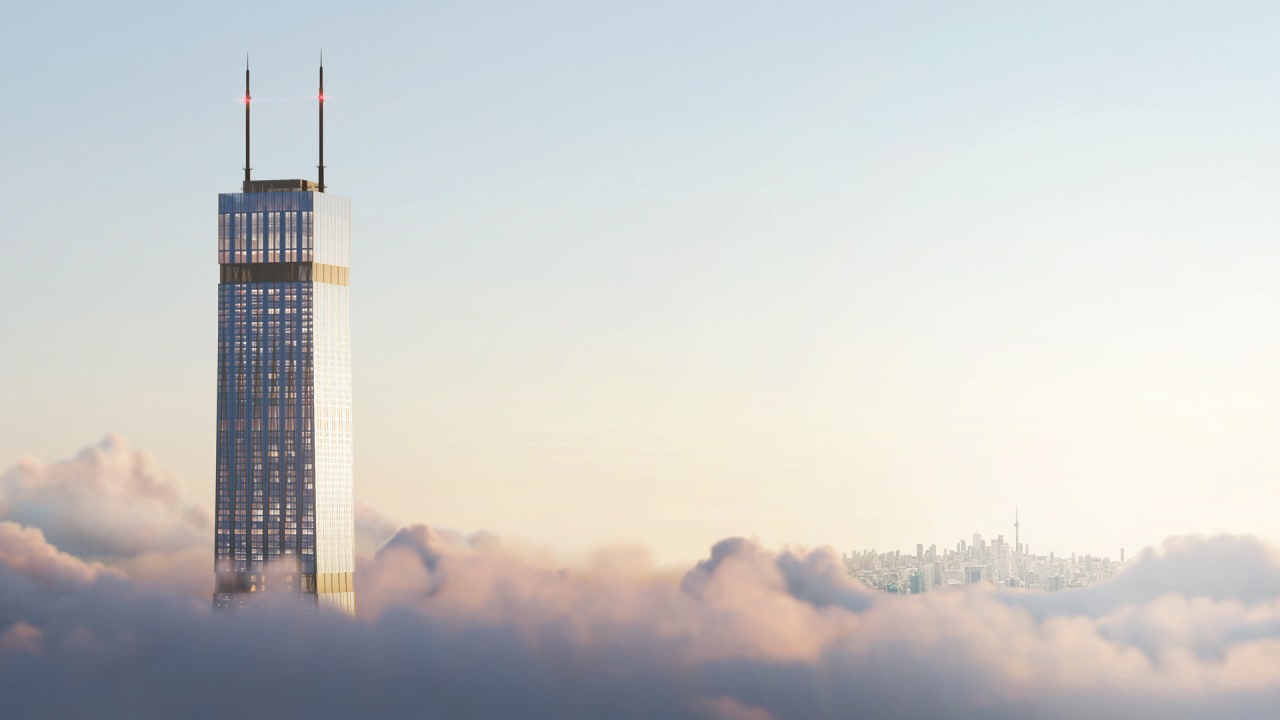 A typical skyscraper has a massive carbon footprint, both embedded in the production of materials such as concrete and steel and from the energy used to keep it running. But if this new, conceptual 105-story skyscraper is built, it could operate with essentially no carbon footprint at all.

“The prototype is a way of saying to the world, look, we can actually make buildings zero carbon,” says Craig Applegath, founding principal of Dialog, the Toronto-based architecture firm that worked on the design along with engineering and construction partners. “And not just saying it’s zero carbon by buying offsets from a forestry company or buying electricity from a wind farm 20 miles away, but actually on-site, in situ, zero carbon.”

Solar panels integrated into the building’s walls (along with batteries) are designed to cover around a quarter of the electricity used. A combined heat and power plant in the building provides the rest of the power, using waste heat from the system for both heating and cooling. The plant runs on natural gas, but the emissions are fed into a bioreactor that feeds the pollution to algae, so they don’t escape to the atmosphere.

It’s not a permanent solution, because although it eliminates emissions at the building, it doesn’t get rid of emissions that happen during natural gas production, such as leaks of methane, a potent greenhouse gas. Still, the same design could potentially be used with renewable natural gas made from methane captured at landfills or on farms. And it’s one way to significantly cut total lifecycle emissions. (Moving to fully electrified buildings, running on renewable energy, is another.)

The carbon embedded in the building materials—all of the emissions from the energy and chemical processes from making something such as steel—also dramatically shrinks in the design, from around 75,000 tons of CO2 in the same building if it was built traditionally to 40,000 tons. That’s nearly a 50% reduction. The key is incorporating as much wood as possible in the design.

Using wood in high-rise buildings is becoming increasingly common as a way to make buildings more sustainable. Mass timber, a material used to make posts, beams, and structural panels with layers of wood, can compete with steel and concrete on strength and weight. And because trees absorb CO2 as they grow, wood can not only reduce emissions but help store carbon as long as the building stands.

It’s critical that the wood is harvested in the right way. “If you harvest it in a way that’s sustainable, in other words, if you harvest it selectively, in ways that actually stimulate other trees around it to open up and grow, you are actually going to do a positive job of extracting carbon,” Applegath says. “As opposed to if you clear-cut. That’s bad. It’s worse than using steel or concrete.” (Clear-cutting releases carbon in the soil, which stores even more carbon than trees.)

Developers are racing to build taller and taller mass timber buildings. One completed in Norway in 2019 is 18 stories high. But the material is more challenging to use for the tallest buildings. “The taller you are with wood, the more wood you have to have, because wood is not very good at compression,” says Applegath. “It’s not good to be tall. It’s not efficient. What happens is, you automatically price it out of the market, compared to steel or concrete.”

As an alternative, the architects propose using a hybrid design that combines wood with concrete and steel. The floor systems, which make up around 70% of the building material in a skyscraper, are made primarily from mass timber. The concrete core and steel outside are like a typical building. The designers estimate that the building, which would include more than 36,000 cubic meters of wood, could sequester at least 36,000 metric tons of CO2, nearly as much as taking 8,000 cars off the road for a year.

Over time, the total footprint of the building should be able to drop even more, as the steel and concrete industries begin to shrink their own carbon footprints. “One of the important side benefits of mass timber becoming a sought-after building material is that both the concrete and steel industries are now intensifying their efforts to find ways to reduce their carbon footprint,” Applegath says. Concrete companies are beginning to embed captured CO2 in their products. New technology is making it possible to run heavy industrial processes such as steel manufacturing on solar power. And architects are racing to keep finding the best solutions. “As an architect, one of my greatest challenges and concerns is how we’re going to pull back on the amount of CO2 we’re producing, and also how we’re going to remove some of the CO2 from the atmosphere,” he says.