by nomad
in Biophilia
5 min read
0 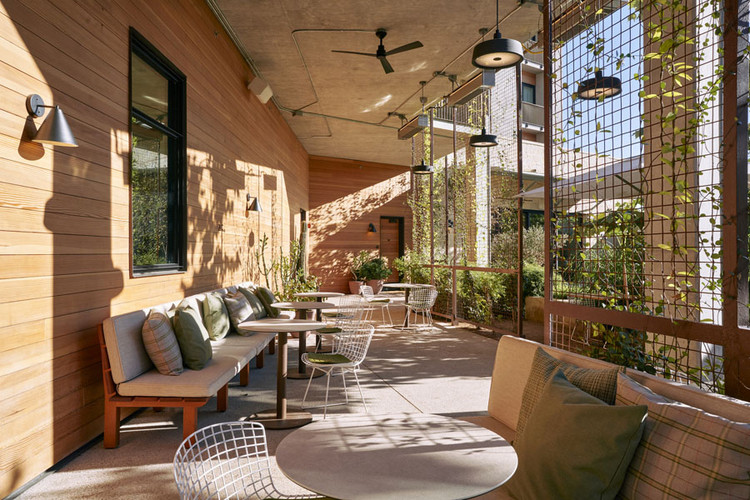 Hotel Magdalena, the latest from Bunkhouse Group, a Texas-based hospitality company known for the highly Instagrammed El Cosmico in Marfa, Texas, is an 89-room hotel that plays on Austin‘s music culture and love for lakeside living. Named after Mary Magdalene, the hotel is part of the group’s hotels that are named after Saints, neighboring the popular Hotel Saint Cecilia and Saint Cecilia Residences, which are currently under construction.

“Mary Magdalene was both a sinner and a saint. Austin is a little of both, and so is Hotel Magdalena,” says Bunkhouse design director Tenaya Hills.

Segmented into four separate buildings, the hotel is connected through open-air walkways in a way that elevates guests amid the Live Oak canopy, acting as a sweet escape from the popular South Congress Boulevard below and the newly developed Music Lane. The hotel soft-opened in September and is the largest Bunkhouse project to-date. It also happens to be the only Bunkhouse hotel built from the ground-up in Austin.

Furthermore, the hotel is the first mass timber hotel constructed in North America. Lake Flato partner David Lake worked with the Canadian company, StructureCraft, to make it all possible, ultimately choosing mass timber construction for its environmental sustainability and swift construction times. (The use of this system shaved three months off of typical construction estimates.) Exposed timber walkways in the corridors carry into each of the guest rooms, creating a marriage between the interior and exterior, while purposeful landscaping from Ten Eyck Landscape Architects bridges guests’ experience through flowing, organic greenery.

In early design conversations, Lake|Flato and Bunkhouse agreed that sustainable construction would be integral, part of the larger conversation of reducing energy, conserving water, and lowering the demands on the planet. “Timber frame is an ecologically sound solution with glulam columns and beams and a cross-laminated timber deck spanning between. We chose this approach because the system is pre-fabricated and quickly erected in addition to being a low-embodied carbon and sustainable structural system,” Lake comments. Dowel-laminated timber, a man-made timber product, is already gaining popularity in European and Australian architecture and Lake|Flato hopes this project will set the tone for its continued usage in the States.

Located on land once owned by Willie Nelson and home to the Terrace Motor Hotel (the place to see and be seen at the time), the site’s history heavily inspired the interiors. The design is full of energy, making use of pieces that are an homage to Austin in the 1970s. “The furniture we designed for the rooms was inspired by the smart system of furniture you see in midcentury designs from Le Corbusier and Alvar Aalto,” says Hills. Guest rooms also feature bright custom tile from L.A.’s Kismet Tile in four color schemes, photography from the Austin Opry House (which also once sat on the site), and “ vintage hippie textiles” which capture the spirit of the era.

The sloped landscaping, custom outdoor rocking chairs, and the pool is another throwback to a bygone era and carefree days. “I think people are really loving the outdoor spaces at the hotel, especially in this current time. The porches have been well received and a great place to have a nightcap,” Hills adds.

Finally, there’s the hotel’s restaurant, Summer House on Music Lane, named for the Terrace Motor Hotel’s own restaurant, Summer House, a pool-side restaurant with musical acts. “We found a picture from the opening year of the hotel that shows a great ceiling lattice detail, which we replicated in Douglas Fir in the event space and at the restaurant,” Hill says. Overall, the hotel perfectly captures the spirit of the Live Music Capital of the World.

This article was originally published on Metropolismag.com