Biophilic architecture in the Andes 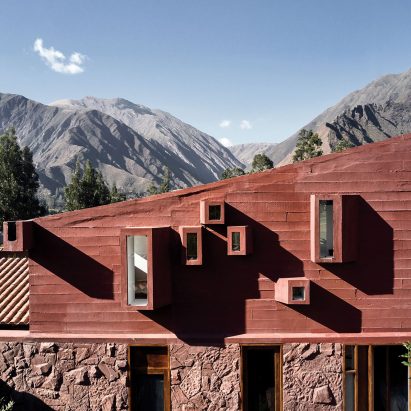 Casa Huayoccari is located in the valley of Urubamba, a mountainous setting considered sacred by the Incas. The house appears to be enclosed by the Pitusiray mountain range, which provided the cues to design the house in separate volumes with mono-pitched roofs.

“Casa Huayoccari stands at 2,950 metres above sea level, in a special place within the valley, giving the impression of being in the centre of a circle of surrounding mountains, and not in a lineal valley, which is in fact the case,” said Barclay & Crousse.

“The project does not refer to the traditional architecture of the valley, but instead the mountains which surround it.”

In addition to the rooftops, the house is designed to step down the sloped site – the firm has also landscaped outdoor areas into terraces.

“The sloping land is treated with stone made terraces and a platform which generates a horizontal ground for the house to be installed on,” it explained.

“The traditional gable roof is decomposed in two planes adopting the pitch of the surrounding mountains and thus generating spatial compressions that frame the low valley and spatial dilatations, which lead towards the Pitusiray mountain.”

While the form of the house draws on its surroundings, the materiality is rather different. Local Andesita Red Stone covers the roof and forms the lower portions of the walls, while the upper half is board-marked concrete, which includes pozzolanic cement that gives it a red tint.

“It’s a cement of volcanic origin, and has ferrite in its components, so it has a natural, reddish color that oxidates (getting darker) with weathering,” said the studio.

Barclay & Crousse has protruded a cluster of chunky, red window frames from the concrete walls. The lower walls meanwhile are punctuated by large, wood-framed windows.

The studio, which is led by architects Sandra Barclay and Jean Pierre Crousse, was originally enlisted to design two sister houses for the site. Casa Huayoccari is the first and was completed in 2018.

It has an L-shaped floor plan that wraps a patio at the house’s entrance – an area covered by a white-painted sloped ceiling with views to the Pitusiray peak.

From here there is access to the living and dining rooms, which occupy the ground floor alongside three bedrooms. The main bedroom is located on the first floor and has access to a terrace.

Barclay & Crousse has white-washed portions of the concrete walls inside the house, to create a bright interior, while the red stone remains exposed and is complemented by a glossy flooring tile.

The interiors are intended to be kept naturally warm and cool by the shape of the roofs.

“In the afternoon, the roof, covered in stone, protects the house from the strong sunshine, but its thermic inertia enables the accumulated heat to propagate during the night, a period of time during which the temperature drops due to the altitude where the house is situated,” said the studio.

Barclay & Crousse is led by Peruvian architects Jean Perre Crousse and Sandra Barclay. The pair set up their studio in Paris in 1996, before relocating to Lima in 2006.

The studio has completed a number of projects in Peru, which it told Dezeen is making a comeback following decades “erased from the architectural map” thanks to international recognition of impressive new buildings in the country.

Other projects include the clifftop Casa C3, an archaeology museum and the Edificio E university building in northern Peru, which was awarded the Mies Crown Hall Americas Prize in 2018.

Photography is by Cristóbal Palma.