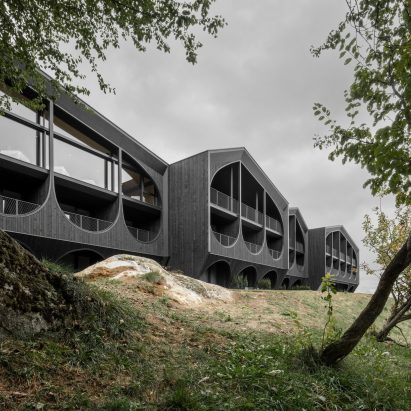 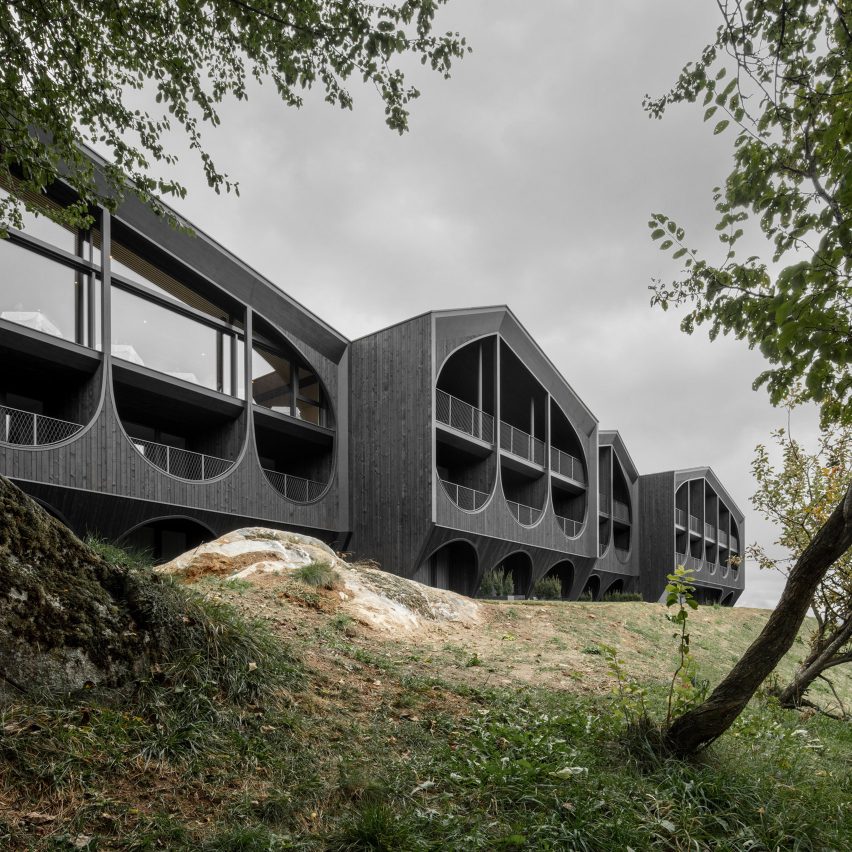 Located in the small Alpine village of Maranza with views of the Dolomites, the hotel is segmented into four staggered volumes, unified by blackened larch cladding and large curved cut-outs in their facades.

It is designed by Milanese studio Peter Pichler Architecture to recall traditional wooden barns in the region and ensure it is a sensitive addition to its rural setting.

“Hotel Milla Montis is inspired by the vernacular architecture of the region and the classic wooden barn, giving a contemporary reinterpretation of this typology,” explained the studio’s founder, Peter Pichler.

“Maranza is a small village in South Tyrol with a significant agricultural background,” he continued. “At Peter Pichler Architecture, we always try to enhance the local context, traditions, and elements that characterise the place.”

Hotel Milla Montis contains 30 rooms that range from doubles to large suites with private saunas. Many of them have access to a private balcony, framed through the large curved cut-outs in the facade.

There are also a number of shared facilities including a bar, restaurant, and spa, all of which have been positioned with views of the Dolomites.

The distinctive cut-outs across its facade are designed by Peter Pichler Architecture to emulate the shapes of pitchforks used by local farmers in Maranza.

Teamed with the black-painted larch cladding, sloped roofs and fragmented layout of the hotel, the cut-outs are also hoped to reduce the visual impact and perceived scale of the building.

Hotel Milla Montis’s interiors are described by the studio as having “a timeless Alpine style”, and like the exterior, uses wood as the predominant material.

Light ash wood furnishings are married with green woollen textiles, chosen to contrast with the hotel’s exterior and introduce “a dash of colour” that nods to the surrounding landscape.

There are also a number of stone furnishings, including a large counter in the bar made from Gneiss sourced from Passeier Valley in South Tyrol, and slate tiles in the spa and bathrooms.

According to the studio, almost all Hotel Milla Montis’ furniture is custom made, excluding a few classic carved-wood Tyrolean chairs in some of the hotel rooms.

Peter Pichler Architecture was founded by Pichler in Milan in 2015. It is headed up in collaboration with Silvana Ordinas.

Elsewhere in Italy, the studio is currently developing a series of treehouses with sharply pointed roofs and blackened wood cladding for a mountain forest in the Dolomites. It has also designed a collection of gabled treehouses for a forest in Kitzbühel, Austria, as part of a 7-star hotel that is being built in the small Alpine town.